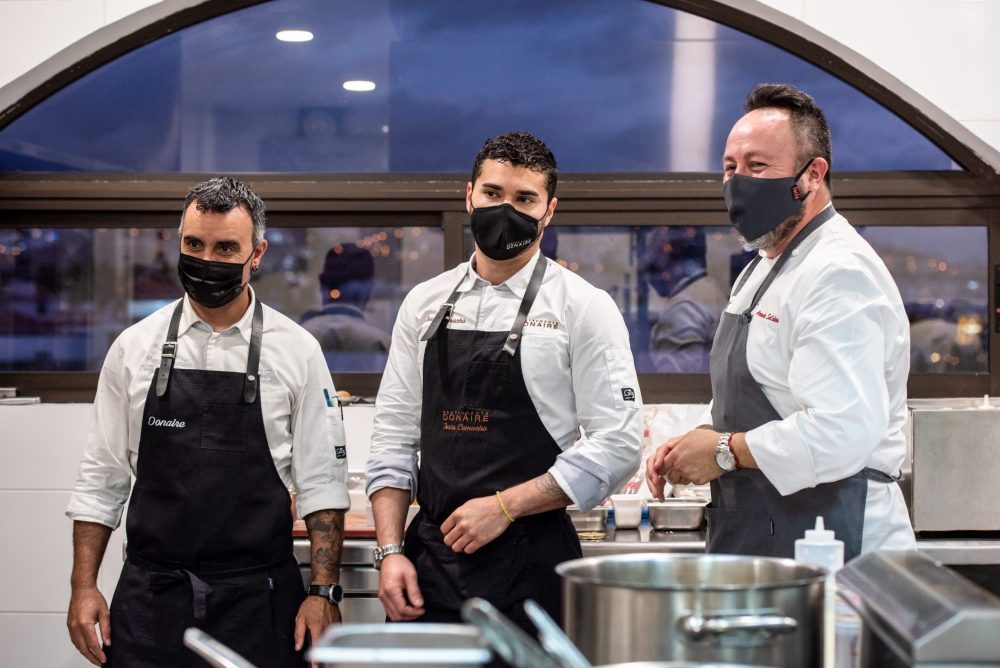 The ‘four hands’ event, together with Donaire’s chef, Fran Expósito, culminated in a gastronomic event marked by the boldness of the dishes, with Canarian and Latin American influences

Bathed in the spectacular December sunset in Costa Adeje, the Donaire restaurant celebrated last Saturday the ‘Canarias Brother Food 12/12’ with Armando Saldanha as an exceptional guest. A gastronomic encounter marked by bold creativity while exhibiting on the same stoves, the traditional Canarian-inspired cuisine of the house chef, Fran Expósito, and the renownd international cuisine proposal of Saldanha, chef of Amor de mis Amores and Gato Negro.

The table reservations were fully booked as expected, for the meeting of the two chefs who have different culinary cultures, but who are united by the curiosity to experiment with new mixes and textures in their dishes. It is one of the objectives of Brother Food, a project with four hands, and of Donaire, that looks for chefs of reference to team up and create the different local and international cuisines.

With that declaration of intent, the comparison of both creative stamps on the late-night menu was inevitable; In that of Fran Expósito, with his Canarian-inspired recipe book, he highlighted the octopus ranch and the marinated rib; in that of Saldanha, he highlighted the steamed Vieja, the tuna tartare with chiplote and the bacon confit en mole, dishes through which the Mexican chef created flavours of his land and Peru.

The menu was completed by desserts that are an essential part of Donaire’s offering. The hand of his pastry chef, Jesús Camacho, was reflected in the rosemary-infused ice cream and the recreation of a cactus with mezcal, mango, lime and banana. The sommelier and head of the room Mayta Meza was on point with a pairing made up of reds, sparkling whites and cider for dessert.

Both Fran and Armando express their mutual admiration. The Mexican chef acknowledges that he has been following what they do at Donaire for a long time, “for me it has been a discovery because both Fran and Jesús work to innovate and to go one step further. It is a vision of a kitchen similar to mine, that is why I feel comfortable with this proposal ”adds Saldanha. In a similar vein, Expósito described this Brother Food 12/12 as “a natural meeting for innovation, in order to express our roots and always counting on local products”.

Fran Expósito is part of a team that not only includes great talent such as Jesús Camacho, but also Mayta Meza as head of the room and sommelier and a whole team of professionals who are creating, with Donaire, their own identity. The à la carte restaurant at the GF Victoria hotel, owned by GF Hotels, has become a benchmark for the new creative cuisine of Tenerife.