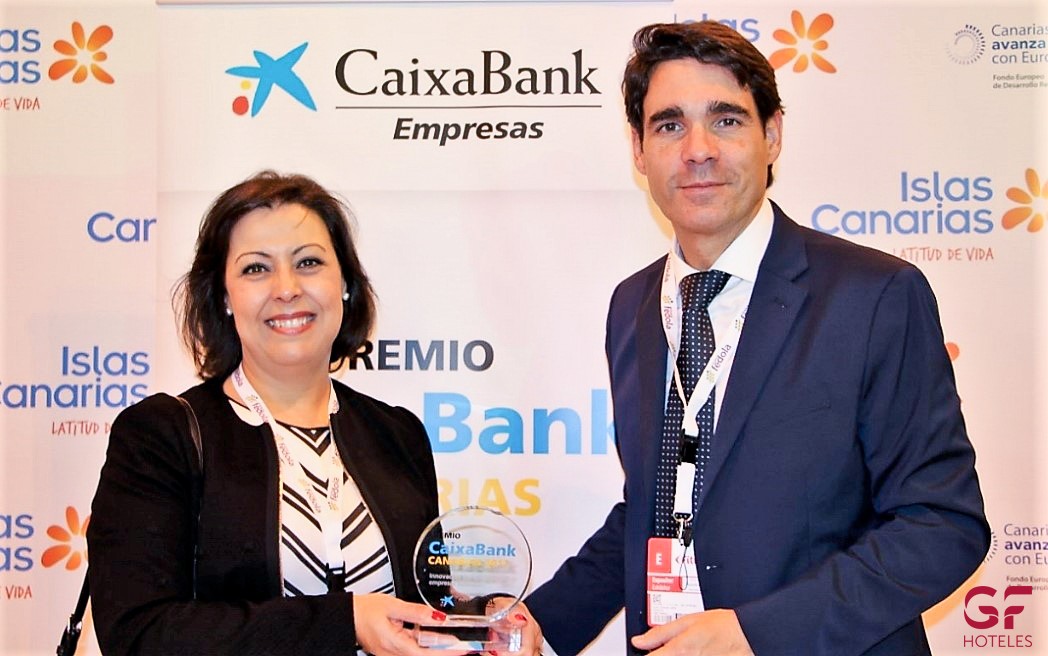 The jury of the “CaixaBank Award for Innovation and Modernization of Tourism Companies in the Canary Islands”, comprises representatives of CaixaBank and the associations Ashotel, Feht, Asolan and Asofuer.  They have selected as winners of the second edition of this award, the three tourism companies: GF Victoria, La Laguna Gran Hotel and Club La Santa. The prizes were awarded at the Canary Islands stand, within the scope of the 38th edition of the International Tourism Fair (FITUR), which took place at IFEMA from 17th to 21st January,2018. The President of the Canary Islands Government, Fernando Clavijo and the territorial director of CaixaBank in the Canary Islands, Juan Ramón Fuertes, were responsible for delivering the prizes to the three winning companies.

The jury assessed, among other aspects, the degree of innovation and modernization that has been made in the product or service offered, the size of the target market to which it is directed, its sustainability over time and the results obtained with respect to the resources used or the generation of employment.

In the opinion of Juan Ramón Fuertes, territorial director of CaixaBank in the Canary Islands, “all the tourism companies that applied for this award, and that operate in the Canary Islands, have shown a very high standard in their candidacies. For this reason, it has been very difficult for the Jury to choose a single winning company. At the time of evaluating the winners, the vote was so close that, in the end, the jury decided to recognize again all three finalists “.

About GF Victoria, a company located in Tenerife, the jury valued highly its innovative proposal as a differentiated product in category “5 * family” and its firm commitment to the sustainability and efficiency of the infrastructure. They also highlighted that the company is a signatory partner of the United Nations Global Compact, also becoming the first Canarian hotel chain to join as a partner. The jury also took into account the fact that it is one of the first establishments in the Canary Islands with Energy certification type “A” and its goal of achieving 90% of its energy consumption from renewable sources.

About La Laguna Gran Hotel, a company located in Tenerife, the jury considered the important renovation that has allowed for the recovery of the historical heritage of the city of San Cristóbal de La Laguna.

About Club La Santa, a company located in Lanzarote, the jury appreciated its historical trajectory of innovation, as its offer specializes in sports tourism, having created a new market segment that has made them a European reference in facilities and sporting activities.

The winners of this second edition of the “CaixaBank Award for Innovation and Modernization of Tourist Companies in the Canary Islands” will receive a 3-day trip for 2 people, including a flight and accommodation in a superior category hotel.

This recognition has an element of learning and business development because, during the stay, which will be in a prime tourist area of national and international standing, the winners will have the opportunity to meet with hotel managers in their own area and to study their methods of work.