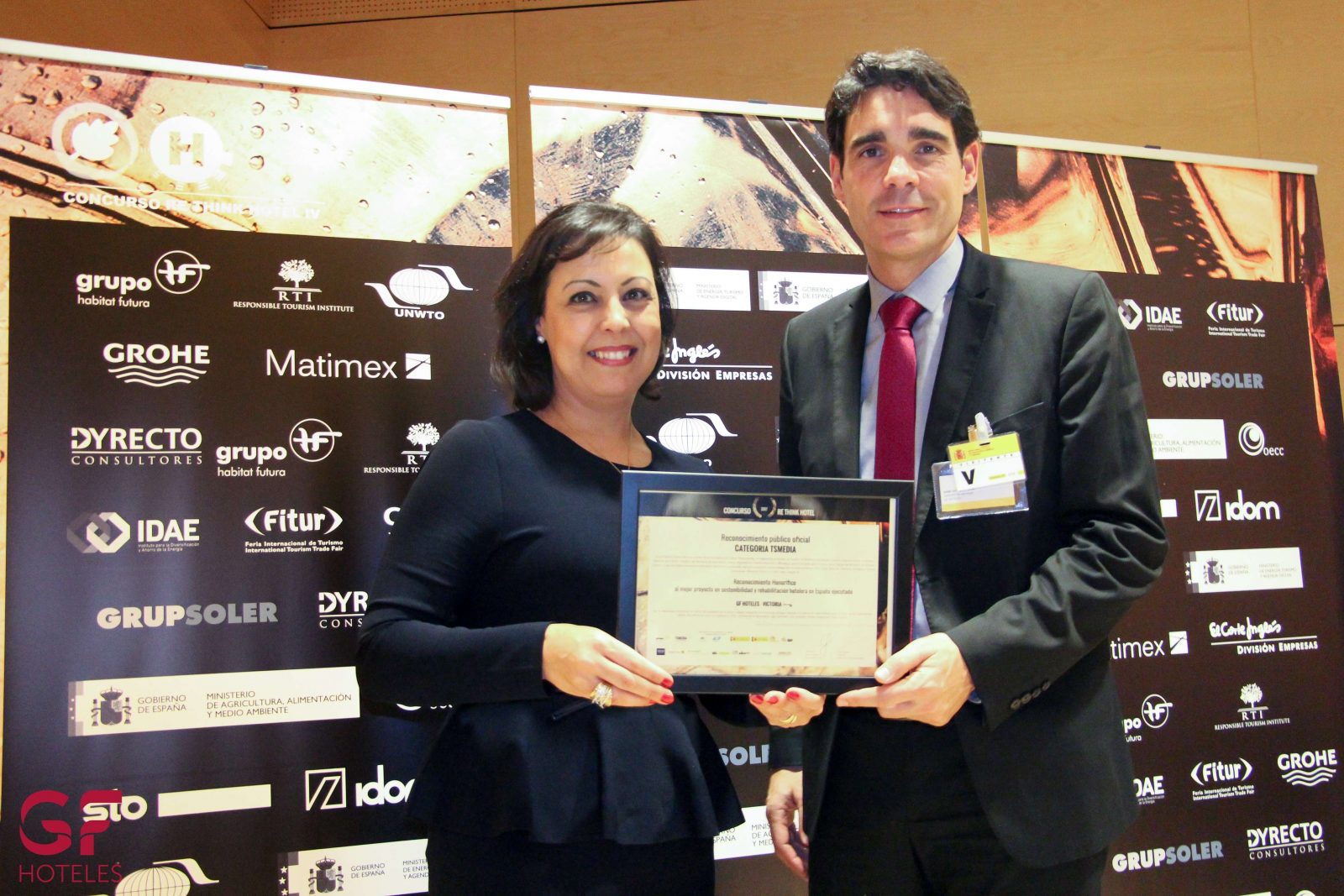 The new luxury five-star complex from GF Hoteles received this award for achieving 90% of all its energy consumption through renewable sources.

The prize was awarded in the context of the “Re Think Hotel” contest organized by the Hábitat Futura Group during the celebration of Fitur 2018.

GF Victoria now forms part of the select group of hotel complexes distinguished for presenting a quality tourism offer based on an excellent sustainable model. This was recognized by the “Re Think Hotel” contest in its Top 10 TSMEDIA, which rewards the best projects for sustainability and hotel rehabilitation carried out in Spain.

GF Victoria was conceived with sustainability as a transversal axis of its accommodation proposal, with the implementation of innovative solutions to help achieve this goal. The jury recognized the efficiency of the design of the building and the integral systems throughout its facilities. The result is that 90% of all its energy consumption is realized through renewable sources.

The General Manager of GF Hoteles, Victoria Lopez, affirms that this award “is the result of work that began 10 years ago when, in the middle of a crisis, it was decided to grow and manage in a sustainable way, with the involvement of the entire staff of the chain; that’s why we dedicate this award to all GF Hoteles employees “.

The new complex of the GF Hoteles chain stands out for its energy efficiency model, especially in the design of the materials used in the walls and roofs of the building. The immediate result is greater thermal insulation and lower consumption of conventional energies. This commitment has been key for GF Victoria to be the first new hotel in the Canary Islands to achieve a Type A energy certification.

There are further innovative elements such as the largest roof garden on the islands. The structure of this ‘natural carpet’ is light, with minimum maintenance that facilitates a perfect drainage. The complex opens its doors with an LED light installation, which means a consumption five times less than a normal lighting system.

GF Victoria joins the rest of the GF Hoteles complexes as a signatory partner of the UN Global Compact, a document which commits private companies to comply with the 10 principles of sustainable development, signed in Paris in 2011. The United Nations promotes a model of planetary development that encourages economic growth compatible with the well-being of workers as well as the preservation of the environment.

With the recent opening of its doors, GF Victoria includes 242 suites built on an area of 29,000 m2 in the Costa Adeje area of south Tenerife. It is the fifth establishment of GF Hoteles, the chain belonging to the Fedola Group. The inauguration of this complex has meant the creation of more than 300 direct jobs.